This trip we have experienced the most beautiful colors of autumn has left many beautiful memories despite all the tiredness. Your city is wrapped in the moment of medieval weather and it leaves you and a moment in the arms of a romantic and trite atmosphere.

Karlov Must (Charles Bridge): This bridge over the Vlatava River connects Prague Castle and Starometska, which is the old city square. In the fairy weather that Prague carries; The effect of this bridge, which is about 500 meters long, is huge. There are 33 magnificent and beautiful sculptures on the bridge. Even one of these sculptures is a Turk … It is possible to see the traces of Turkish fear of the Czechs at the Astronomical Clock. You will surely notice the enormous belly and imposing janissary statue on the bridge.

Charles Bridge; it is almost impossible to cross the bridge at least twice a day because it is located on the line of sightseeing places. It is possible to find artwork or handmade souvenir sellers on the bridge. Enjoy the bridge. You’ve been watching the river for a long time. Each and every sculpture, examine details without missing details. I will not be able to tell from the bridge that night is another. 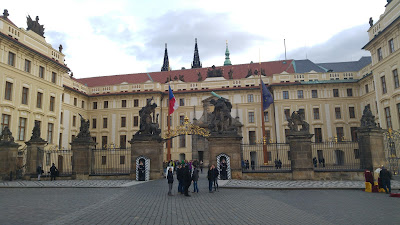 Prague Castle: This castle is a very large settlement, one of the most beautiful structures in the city. It was built in 870 and features Renaissance, baroque and neo classical style. The building, which started as a castle, turned into a castle over time and became the residence of the Czech kings.

The castle settlement is huge. Entrance to the campus is free. However, there are several tracks to see different things inside.(Circuit-A, Circuit-B, Circuit-C). We; We chose Circuit-B. In; St. Vitus Cathedral, Great Royal Palace, Golden Road and St. There was George Basilica. As long as you can certify, you can take advantage of the discounts applied to your stay. Do not forget to ask …

St. Vitus Cathedral: One of the most impressive and magnificent structures of Prague Castle, perhaps even Prague.

Interior decorations   and the stables are spectacular.

Without getting a ticket; you can go to the places that are separated by the cords and see the inside of the cathedral from afar.However, with so much detail and workmanship in mind, when you arrive here, take your ticket and go inside the cathedral.

Golden Lane: Colorful little houses lined by a narrow road … The front was built for guardians at the top, but later became the living space of the aristocrats. There are houses where different poets and writers, including Kafka, live.

Some were preserved with their own; in a tiny room; bed, dining room and room, sewing machine, etc …. Another house was designed as a film screening site for an amateur cinematographer. Someone belongs to a female poetry that overlooks tarot falcon. Some houses have been converted into souvenir shops and museums. I strongly recommend that you see the Golden Road in the fairytale town image.

Kalenin gardens are also very famous. If you have time please go absolutely. I was saddened to learn that the toy museum I learned was in the castle campus when I was researching from the internet. I wanted to share this information with you.

Old Town Square: Surrounded by 8 magnificent towers, this square is home to the famous theologian Jan Hus. The crowd is crowded and moving. Watching the performers is so much more enjoyable. Here; Tyn Church, Old Town Hall, St.Nicholas Church and Astronomical Clock.

St.Nicholas Church: Behind the Astronomical Clock Tower in the square, this church we discovered by chance has magnificent ceiling ornaments and a magnificent courtyard. When we visited there was a loud choir concert. The church’s acoustics were beautiful, the seats we were sitting on were warm. And it’s free … What more.Tyn Church: The outside gothic baroque church is one of the most impressive buildings on the square. It is said that one of the asymmetric towers represents the male of the earth and the female of the other.

Astronomical Clock Tower: A port of call for the city. Every dine is crowded ahead.

Twelve 12 hour symbols on the clock show 12 bastard symbols. The Saatin story is quite interesting. According to the belief, Hanus, who is an hour master in the 15th century, makes this watch. Everyone loves this clock after hours. Although Hanus tries to learn how to make the clock, Hanus keeps it as a secret and does not tell anyone. However, at that time the city government wants to make sure that this beautiful clock is only in themselves. That’s why they blind Hanus.

At the beginning of the hour, twelve chapters pass in front of the tiny windows on the door. There are four figures, each representing a different concept: a Turk (pleasure and entertainment), a figure with a mirror in his hand, a skeleton (death), a Jewish (greed)

It is said that there is a magnificent view of Prague from the clock tower. We can not go to the tower, but for the second time I come to this city to watch the scenery at the beginning of what I want to do.

Kafka Museum; On the bridges of Charles Bridge … It’s a very interesting museum. Kafka’s life, handwriting, the first editions of his books, his love, his family and a lot of other things about Kafka …. The way they are exhibited is very interesting. There is a modern and a bit scary weather in the museum … The entrance is 8 euros. If you are really a fan of Kafka and you have the time to spare, I think.

Other: Do not forget to take a trip to the Jewish Quarter, the Old New Synagogue, the Jewish Cemetery, the Dancing Building, which we have not been able to find because of the time, but are recommended by many different sources.

Getting to the City Center from the Airport

Public transport in Prague is extremely affordable and easy. You can take the bus number 100 or 119 from the airport.

We preferred the bus number 119 because of the hotel line. Nadrazi Velesvalin landed on the metro stop. This is enough for 90 minutes. 32 krona. (Only € 1.25). However, remember to activate your ticket in the yellow boxes before or during the first public transport you are using. It is located inside the yellow boxed buses and at subway stops. There is a counter at the airport where you can buy tickets. You can also buy tickets from ticket machines or buffets on the metro.

Crystal; Prague is a complete crystal paradise … You have absolutely heard famous Bohemian crystals. There are various gift crystals available. Beautiful jewelery, ornaments, vases, glasses, etc. If you are going to Karlovy Vary, do your shopping from here. Prices are much more affordable. Plus, the exchange rate is much better.

Puppet; The small puppets of Prague are also very famous. However, the prices of the beautiful and flashy ones are a little high.

Duck, goose, venison and so on. game animals …

Trdelník: Trdelník, a Slovakian dessert, you will see in many places in Prague. You should definitely try Trdelník, which has two options, cinnamon or badmint. The streets smell like cinnamon because of this sweet …

Without seeing a bird’s eye view of Prague Castle or Astronomical Clock Tower,What to do?

What Should You Watch?

We were staying at the Waldstein Hotel in the castle district. It’s a historic building. The hotel was very nice and clean with an inner courtyard, windows, oak wood furniture. Breakfast was also quite good. The only nuisance is that there is no lift because of the building’s history. You are taking your baggage to your room. From here you can easily exchange foreign currency. Setup is good and there is no commission. 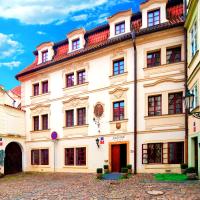 Historical Old Town. Explore the most charming part of Prague, complete with a stunning 15th-century astronomical clock tower and the world-famous Charles Bridge. Recommended as a great area for eating out. There are 5 recommended places to eat close to the property Top-rated breakfast. Guests say this is one of the best breakfasts available in Prague Airport shuttle. Good coffee! .
Still interested in Hotel Waldstein? Enter your dates and book before it’s too late.

Hotel Waldstein is situated in the most attractive part of Prague, surrounded by Prague Castle and just a few steps from Charles Bridge and the Old Town Square.

All the most important sights of Prague are easily accessible on foot. The nearest metro station is accessible within a 5-minute walk and a tram stop within a 2-minutes walk.

Karlovy Vary, a spa town about 2 hours from Prague … You can come here by train or bus. We chose the bus journey because it was shorter. Get off at the Florenc metro station. There is a bus terminal right behind; Praha Florenc. Student Agency bus company is the most known and preferred company. Tickets roundtrip 10 euros.

Karlovy Vary’s air is clean; the waters are healing.

On the right side of the Grand Hotel Pupp you can go to one of the 3 restaurants above with a finishing touch. We went to the second-level Diana Restaurant. We liked the food and the prices. (with side garnish, half duck about 10 euros) A hot meal and a main meal for two people are very comfortable. I recommend liver liver as a hot spot. Also, when you go to the restaurant’s tower, a wonderful view of Karlovy Vary awaits you. You will see how autumn season looks good to a town.

Vřídelní Kolonáda; The spa buildings you can see in Sadová Kolonáda (Fruit Garden Tadis) and Mlýnská kolonáda. Waters are flowing at different ratios than the fountains. Here you will see dozens of tourists who drink from the healing waters in their own hands. These electric porcelain cups are also very beautiful and original souvenirs.

Karlovy Vary’s crystals, herbaceous Becherovka liqueur and garnet stone are famous. Moreover, prices are much more affordable than in Prague. 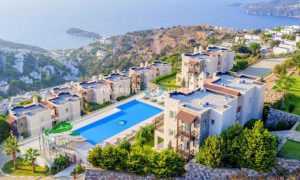 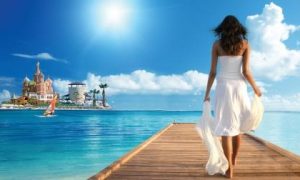